Beer in Celebration of Place

We are excited to announce the release of eight brand new beers that celebrate Oregon’s diverse landscapes! We’ve partnered with local breweries to create beers inspired by place in celebration of the brand new “The Oregon I Am” map—the first-of-its-kind that features 81 outdoor places across the state that anyone can visit, thanks to the work of land trusts. 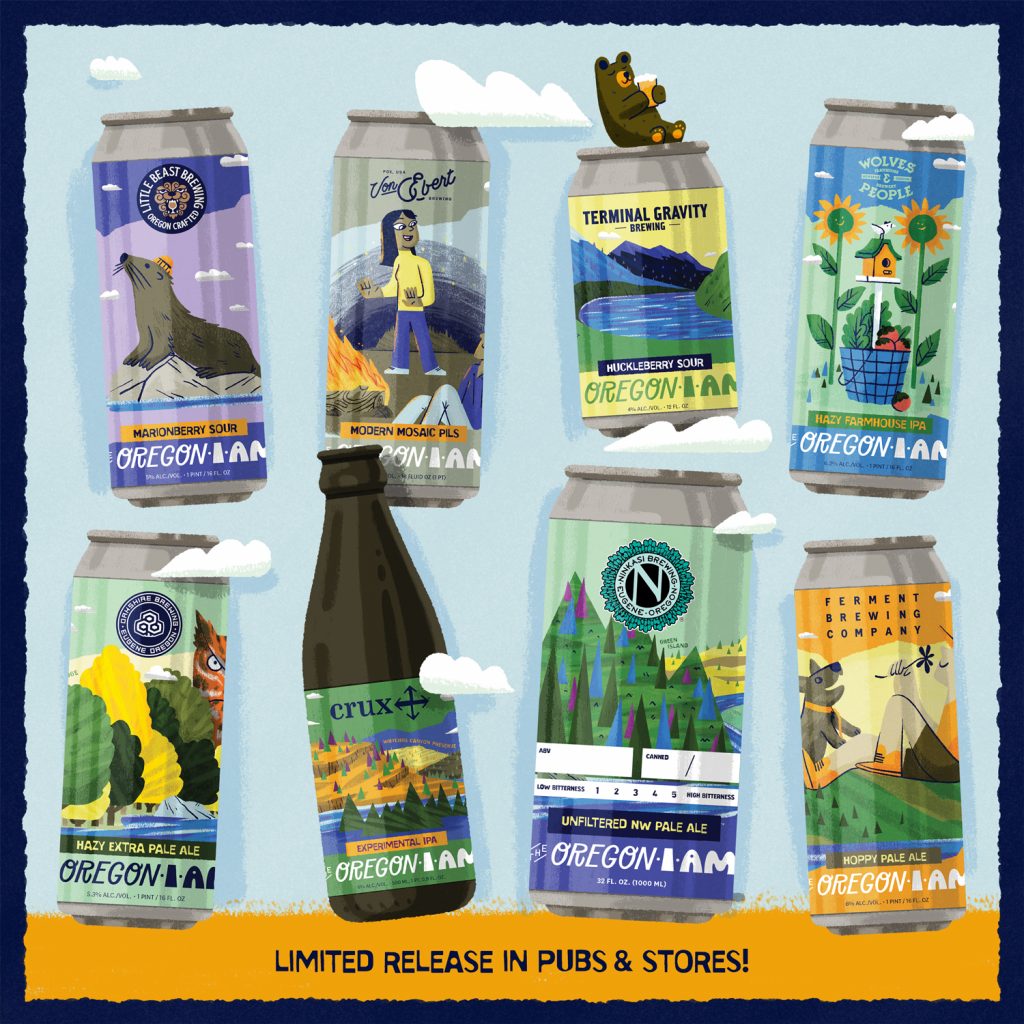 As Oregonians, we love our trees, we love our deserts, we love our mountains, and we love our beer. Many of our land trust members have strong relationships with local breweries because brewers deeply understand the connection between healthy environments and the healthy water, hops, and malt that make great beer.

We knew that working with like-minded breweries would be the perfect way to celebrate the incredible bounty of Oregon and give cheers to these hidden gems in our state. We are so grateful to partner with Crux Fermentation Project, Ferment Brewing Company, Little Beast Brewing, Oakshire Brewing, Terminal Gravity, Von Ebert, Wolves & People Farmhouse Brewery and Ninkasi Brewing, who thoughtfully crafted beer in support of Oregon’s landscapes and our 30 member organizations.

Meet the Brewers & Join Us for Happy Hour!

Mark your calendars for our Virtual Happy Hour and beer launch on the first Friday of the summer! Pick up The Oregon I Am beers and join brewers and land trusts for a free, statewide virtual happy hour celebrating the Oregon landscape through the lens of beer.

Each beer was thoughtfully crafted with Oregon in mind. Breweries set out to pay tribute to the state in several ways, including using Oregon-grown ingredients, fermenting beer outdoors in a nature preserve using microbes from the air, capturing the essence of a sunny Oregon summer day, and/or collaborating with a local land trust.

Each brewery’s beer label features special artwork directly from the map—designed by the local creative firm Jolby—and an invitation to get the map, which is available in English or Spanish when you provide your name and email.

Where to Get The Oregon I Am Beer

All eight beers will be available mid-June with limited cans, bottles, or crowlers, respectively, at each brewery’s taproom, and most beers will receive limited distribution to specialty beer shops throughout the state.

You can pick up the full suite of beers* at select locations including:

*Ninkasi’s beer is only available at the brewery.

Kelley's our Executive Director for the Coalition of Oregon Land Trusts and has over 15 years of experience leading collaborative efforts that support conservation.

In the spring, at the end of the day, you should smell like dirt.” ― Margaret Atwood

Brought to you by your friends at COLT—the Coalition of Oregon Land Trusts, with 30 member organizations statewide. The Oregon I Am is a collaborative effort and celebration of the land and communities we love. #oregoniam

The Oregon I Am Events #oregoniam

Watch Now: The Oregon I Am Film

The Oregon I Am Card Game is Here!

Share “Your Oregon I Am” and win a brand new camping kit!